18 Personal Branding Experts To Know In 2022 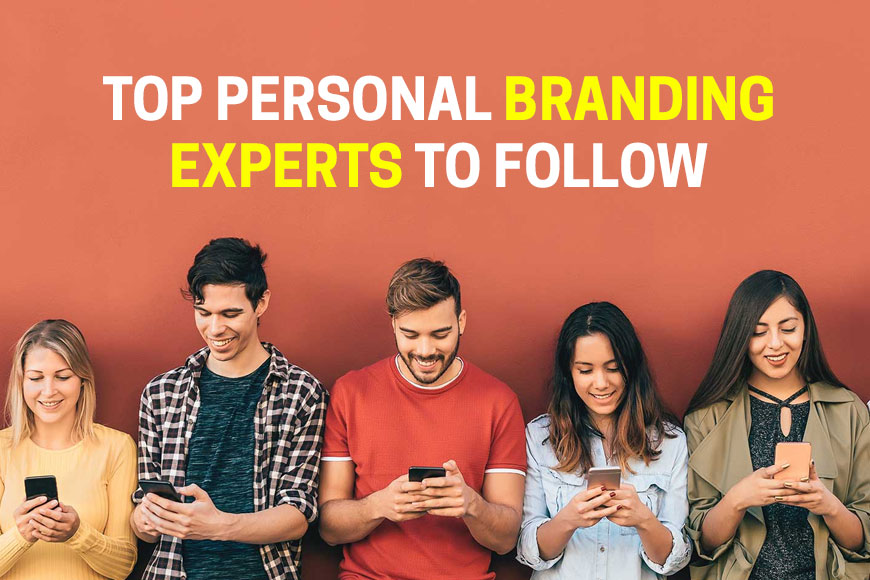 Personal branding experts to know - You're probably aware that three out of every four businesses fail. It is impossible for an entrepreneur to establish credibility if he or she lacks it.

To distinguish yourself in any industry, you must position yourself in distinctive ways. Building your unique brand is one method to stand out. The more your brand grows, the more social evidence you gain.

As a result, the more social proof you accumulate, the more clients come to you eager to hand over their hard-earned cash.

Do you want to identify, develop, and grow your personal brand? These are the top ten experts you should be following.

Leonard Kim was on the verge of becoming homeless at the end of 2010. Nonetheless, he was named a top digital and young marketer in 2016.

He provides inspirational material and teaches people how to identify, build, and grow their own personal brands. Kim has appeared in numerous publications, including Fox News, Fortune, Forbes, and Entrepreneur.

He's also a managing partner at InfluenceTree, where he's created a thorough course that teaches you all of his own branding secrets.

The Wall Street Journal, New York Times, Los Angeles Times, TechCrunch, Fox News, and CBS Evening News have all featured Yu. He is also the co-author of Facebook Nation, which is taught in over 700 colleges and universities throughout the world.

Cynthia Johnson is a businesswoman, marketer, author, and keynote speaker. She's also the editorial director for Social Media Club and a member of its global board of directors, as well as a member of the Young Entrepreneurs Council and a committee member for the Charlotte and Gwenyth Gray Foundation to Cure Batten Disease.

She is also an author and contributor columnist for Entrepreneur, Search Engine Journal, Startup Grind, Business2Community, Social Media Examiner, SheKnows, and other publications.

Ryan Foland is a high-energy speaker, host of 3 podcasts, and a brand consultant. He teaches executives how to build their personal brands and helps corporations become more personable. His 3-1-3® Method uncovers core brand messaging to guide bespoke content marketing strategies.

Ryan has given 4 TEDx talks and has been featured in Forbes, Fortune, Inc., Entrepreneur, and more. His award-winning book, Ditch the Act, teaches you how to get ahead in business by simply being human.

Nicolas Cole is an author, entrepreneur, and creative strategist. Cole's work has been featured in TIME, Forbes, Fortune, Thought Catalog, The Huffington Post, Business Insider, Slate, Observer, and as a top writer on Quora. Cole's writing has received more than 20,000,000 views online.

Cole has created an excellent record of working with thought leaders, influencers, serial entrepreneurs, and business executives to help them grow and magnify their personal brands by utilizing each brand's unique value.

Nicolas Cole is an author, entrepreneur, and creative strategist. Cole's work has been featured in TIME, Forbes, Fortune, Thought Catalog, The Huffington Post, Business Insider, Slate, Observer, and as a top writer on Quora. Cole's writing has received more than 20,000,000 views online.

Cole has created an excellent record of working with thought leaders, influencers, serial entrepreneurs, and business executives to help them grow and magnify their personal brands by utilizing each brand's unique value.

In a short amount of time, his amazing knowledge and professional acumen have helped Rank Secure become a globally recognized SEO firm.

He is regarded as one of the most skilled and promising SEO and branding experts, advising CEOs on how to improve their lead generation and personal brands.

Simons is a proponent of environmental conservation and worker rights, and he has successfully integrated ethical operations into his marketing and organization, resulting in his company's rapid growth.

He has identified himself as a thought leader in his sector due to his regular thought leadership on ethical operations, leadership, concept development, entrepreneurship, and marketing.

Currency Capital, a leader in online business financing, is led by Charles Anderson, its CEO and founder. Anderson has made it his duty to ensure that every company may reach its full potential and receive the equipment it requires when it is needed.

His personal branding is also driven by his recommendations on shaking up the stagnant heavy machinery and equipment financing market.

Anderson makes it a point to visit educational institutions in order to encourage the next generation of business finance leaders.

Carlo Cisco is the CEO and founder of SELECT, a VIP club that provides discounts and exclusive access to activities across the country to its members.

Cisco got his start in event planning early on, but he soon rose through the ranks to become one of the fastest-rising stars in the hotel industry.

Cisco returned to the United States after guiding Groupon's growth in Japan to launch SELECT, which has caught the attention of celebrities such as Victoria's Secret models, notable apparel designers, athletes, and DJs.

Cisco is proof that old-fashioned soft skills like friendliness, passion, and a wonderful grin are the greatest approach to gain a dedicated following.

Having a terrific Instagram account, on the other hand, has never damaged anyone. Mashable, Forbes, Fox Business, Tech.co, USA Today, TheNextWeb, Entrepreneur magazine, and the Wall Street Journal have all recognized him as an authority on entrepreneurship, business, and marketing.

Megan (a.k.a. bodyposipanda) is a feminism and body positivity activist. While she is the face of her company, she uses her position to advocate for social justice and educate people about how everyone, regardless of size or ability, deserves respect and love.

She helps women and men gain confidence in themselves and learn to be kinder to others through her own writings, published books, speaking events, and even a touring performance. Megan's brand exemplifies how activism may become more personal in order to tell tales that have a true influence on a bigger audience.

Since Zoolander made fun of male modeling, it has always had an ironic stigma attached to it. Despite the popular belief that appearances are everything, David Gandy has created a name for himself as a fashion star, a writer, a vintage motorsport aficionado, and a pet rescue advocate.

Gandy began modeling at the age of 21 and rose to prominence in 2007 with Dolce & Gabanna's "Light Blue" fragrance campaign.

Gandy has been writing a regular piece for British Vogue since 2011. He writes on fashion, culture, automobiles, antiques, and London living. He now devotes his time to refurbishing vintage autos and conducting charitable efforts for animal sanctuaries.

His vast internet following has aided in the advancement of his causes and the expansion of his impact in both his career and popular culture.

Nobody could have predicted The Rock's huge popularity and appeal as a result of creating his social media brand. He rose to prominence as a professional wrestler, and from 1996 until 2004, he established himself as a cult celebrity.

He began performing in 2004 and gradually expanded his filmography. He has the fourth-highest number of Instagram followers in the world as of September 2019.

This is not by chance, and while The Rock's films do not win Oscars, they are financially successful. He's now branching out into movie production and developing his own tequila brand.

The combination of publicizing triumphs, new ventures, personal moments with fans and his family, conducting humanitarian deeds, and poking fun of himself is the key to the Rock's social media success.

The Rock's appeal stems from the fact that he is simply enjoyable to watch, and his unusual blend of accomplishment and humility keeps his admirers interested.

His example of how to build a personal brand is one to keep an eye on.

She publishes articles in which she not only shares her discoveries but also offers helpful viewpoints and advice.

Her brand is defined by her eyes and voice, but the knowledge and inspiration she imparts are ageless.

Kristin writes workbooks and articles to encourage and support all writers, no matter where they are in their careers, and she also builds helpful online communities, such as the “Your Write Dream” Facebook group (which has over 6,000 members!).

Well Storied is a great illustration of how personal tales and encouraging tones can breathe new life into an old industry.

Mary Lawless Lee, also known as Happily Grey, started off as a personal blog called Happily Grey, where she discussed all things style in fashion, beauty, and interior design. Her down-to-earth demeanor combined with a classic contemporary aesthetic drew a sizable following on Instagram.

Mary was able to not only be the face of her brand, but also manufacture things such as home decor and even build a boutique store in Nashville, by choosing Happily Grey as her brand name.

Mary even changed her Instagram identity to her own name, opting to keep the Happily Grey brand focused on the things she helped build. This blogger demonstrates how to transform a personal brand into a business that can survive alongside her and in the future.

Gary Vaynerchuk is the poster kid for the importance of social media marketing. Gary, a self-proclaimed anti-guru, is fascinated with teaching the world how to use modern marketing methods to increase their success.

Growing up in New Jersey, he started working for his father as a liquor shop clerk in 1998.

His entrepreneurial spirit aided in the company's multi-million dollar success. He turned his experience with internet attention into a business by growing his social media following through YouTube.

He founded Vayner Media, a digital marketing and advertising agency, in 2009 with the goal of competing with traditional ad agencies. Since then, his online following and influence have exploded.

The huge volume of content (he has a dedicated crew at his agency only for his own social media platforms) and his genuine desire to help others are the secrets to his success.

Gary is noted for his gruff demeanor and propensity to work really hard to achieve his objectives. He has also found success in the field of motivational speaking as a result of this.

He believes in documenting everything he does on camera and using that footage to create bite-sized and long-form content. In general, Gary is a great role model for content development and providing value to your audience.

Oprah Winfrey, a media celebrity, has built what may be the world's most powerful personal brand. She built a loyal following of followers before social media even existed, starting as a newscaster and progressing to a talk-show format.

She has increased her political and personal development influence over the last three decades.

Knowing her audience and presenting an intensely personal version of herself to the public is the key to Oprah's success. Oprah is willing to cry in front of her audience and be open about her personal troubles.

The Oprah Winfrey Network (OWN), which produces its own programming, as well as the Oprah magazine and her Super Soul Sundays podcast, was founded as a result of her genuineness.

While Aileen is the present face of Lavendaire, the brand offers valuable self-development information, motivating content, and useful items (such as workbooks and courses) that are not limited to Aileen.

This brand may be personal to Aileen, but it has the potential to last for an audience interested in personal development.

What Does A Personal Branding Expert Do?

Who Is A Brand Strategist?

A brand strategist is a marketing expert who is in charge of the messaging and strategy of a firm. Effective brand strategists understand their company's product and target demographic, as well as how to create customer experiences that result in sales.

What Does It Mean When You Brand Yourself?

Branding yourself entails creating a distinct professional persona and a consistent message that distinguishes you from others in your organization or sector. Their personal brand images are inextricably linked to their businesses.