Is There A Scam With Adobe Creative Cloud? Stay Alert! 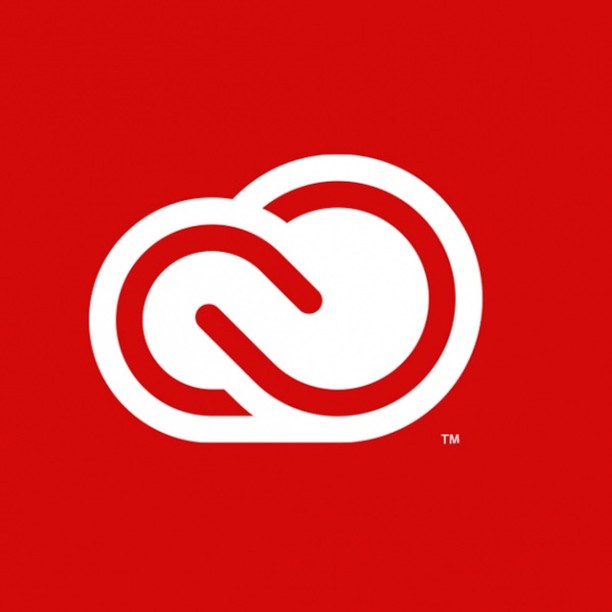 Is there something fishy going on with Adobe Creative Cloud regarding its subscription practice?

Perhaps there is because it failed to escape the radar of DarkPatterns.org, a website that has been exposing dark patterns since 2010.

Harry Brignull, the one behind the aforementioned website, defined “dark patterns” as “tricks used in websites and apps that make you do things that you didn't mean to.”

Through his website, Brignull, a London-based user experience consultant, aims to promote public awareness about these dark matters and at the same time “to shame companies” responsible for them.

One example of this dark matter or trick, as mentioned by Brignull, is “buying or signing up for something,” just like in the case of Adobe Creative Cloud.

Consumers complained about auto renewal subscriptions, among other things.

So, let’s find out more about Adobe Creative Cloud and the allegations being thrown at it. 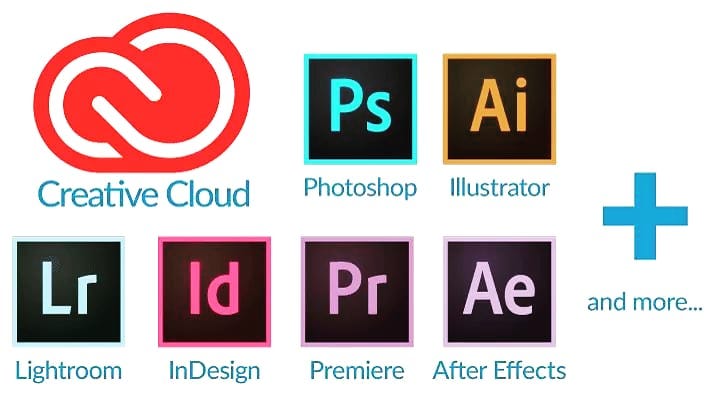 With the tagline, “Create Wherever You Want To Be,” Adobe Creative Cloud is mainly used for the following:

Below are the 24 software programs included in the Adobe Creative Cloud program (alphabetically arranged):

The plans and pricing vary, depending if you are an individual or an organization.

The prices listed below are for those residing in the U.S. and apply to Adobe Creative Cloud All Apps:

All indicated prices are in U.S. dollars, with all applicable local taxes not yet included.

Is There A Scam With Adobe?

The solid collection of software made available through Adobe Creative Cloud appeals to photographers and graphic artists, just to name a few.

The said thread showed the step-by-step process DarkPatterns.org undertook to validate its claim. 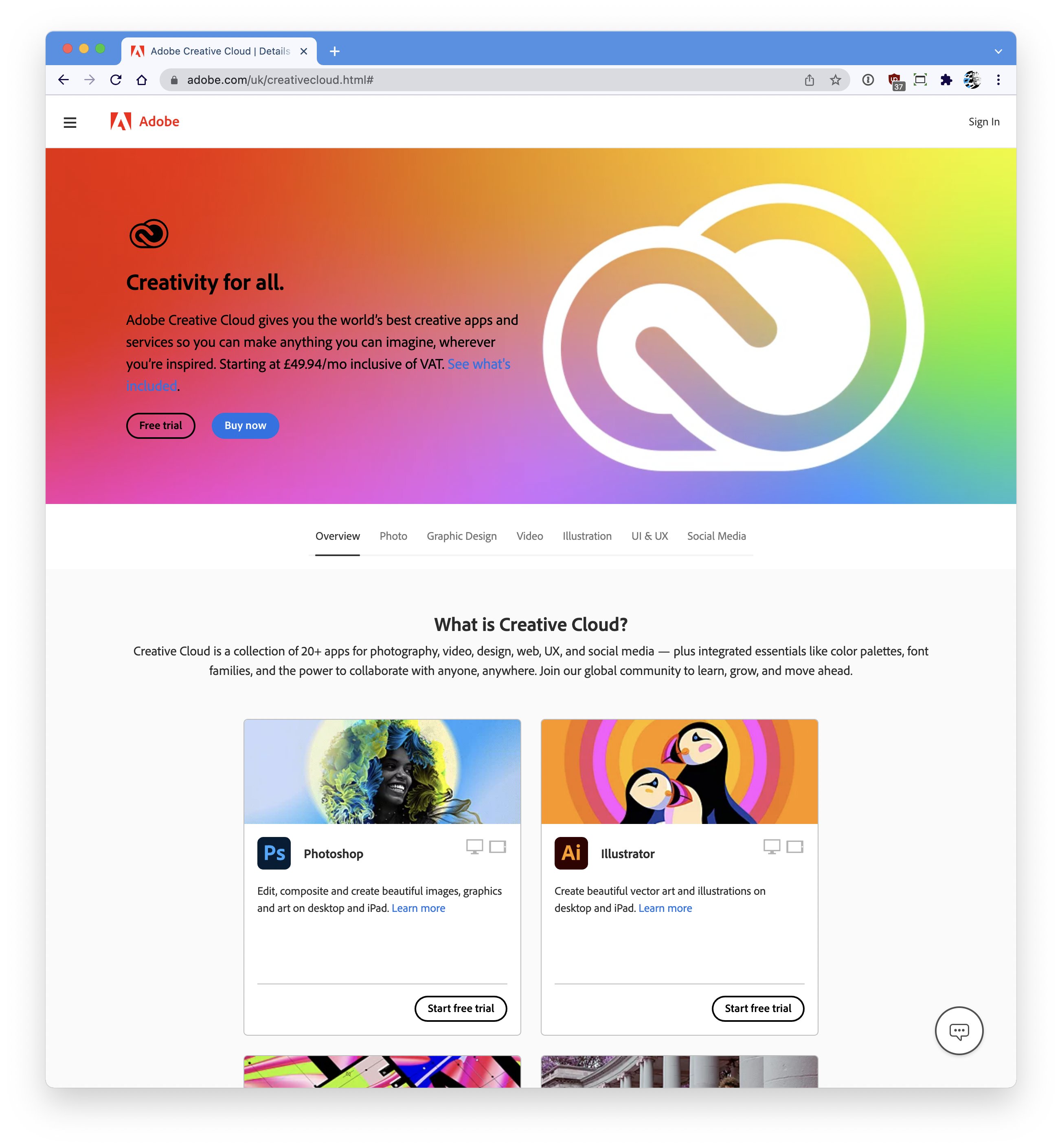 You’ll be billed £49.84 per month, which will start after seven days. 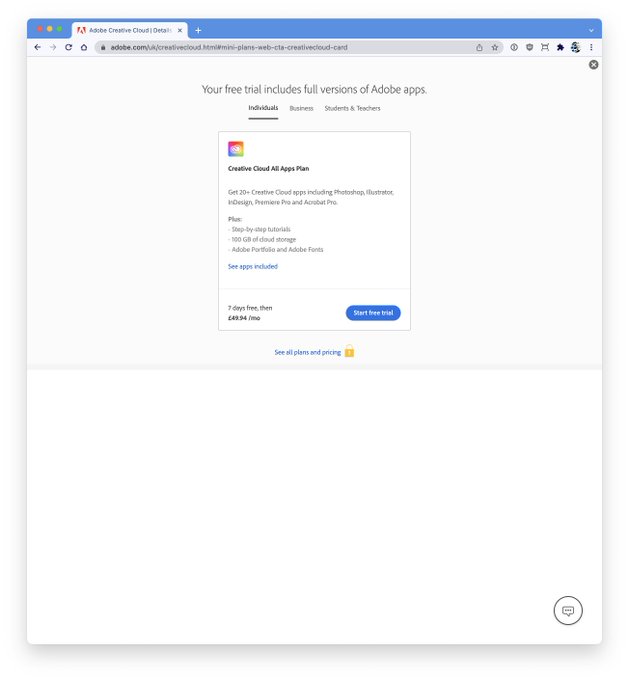 Webpage informing about the free trial for Adobe Creative Cloud

Beside the words “Due Now” is “£0.00,” proving that the first seven days of use is free. Written under “Due Now” is the starting date when billing will start.

You’ll also find – this part is written in very small letters – an important statement regarding your Adobe Creative Cloud subscription. 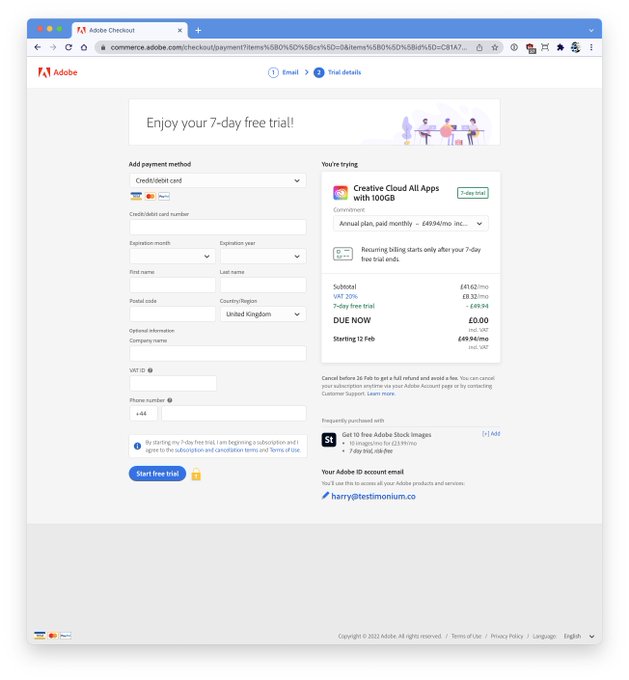 You'll quickly notice how small the gray letters are, with the words “Cancellation Terms” at the bottom. There is no obvious indication that you can scroll down, noted DarkPatterns.org. 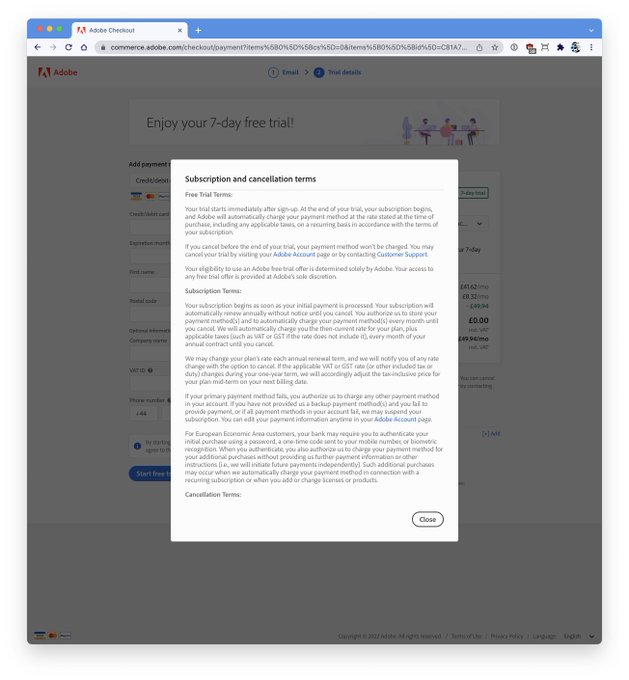 Only by doing so, will you be able to read the “Cancellation Terms,” which is crucial because it will make matters clearer for you.

Here’s one statement: “Should you cancel after 14 days, you'll be charged a lump sum of 50% of your remaining contractual obligation and your service will continue until the end of the month's billing period.”

Just imagine failing to read this part. Your cluelessness will cost you money. 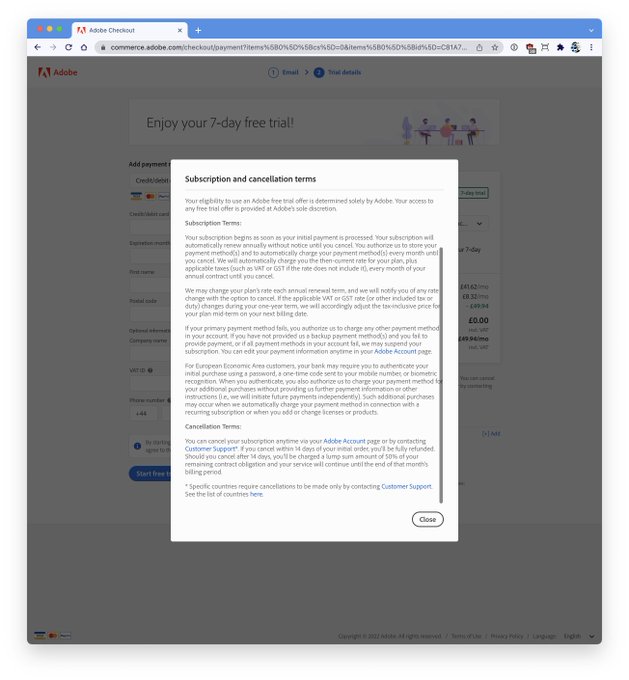 See the table below for the different cancellation fees for your Adobe Creative Cloud subscription.

Going back to the different steps to avail the Adobe Creative Cloud software, one will notice that these two are hidden:

(a) total yearly cost of the subscription

(b) details about the 50% cancellation fee

In addition, DarkPatterns.org. pointed out the inconsistency in the font size. The font size of the “sales text” makes it easily noticeable and readable. The one used for the “clickwrap agreement” is way smaller.

Moreover, it’s “hard to find” the Cancellation Terms of Adobe Creative Cloud, according to DarkPatterns.org.

Many replied to the Twitter thread, with most of them victims of this “scam” and “trap,” as some would describe it in their social media comments.

Michael Redig, an iOS developer from Minnesota, described the subscription policy of Adobe Creative Cloud as “draconian.” Redig fell victim “years ago” and was “sad” that Adobe and the people behind it “haven’t changed their practices.”

Other victims include a biologist from the Czech Republic, a CEO from U.K., a computer scientist from Hamburg, a tech manager from Stockholm, and a programmer from Bologna.

A recent one was Dan Root, a photographer and virtual reality specialist. He was at least grateful that he used PayPal. That way, he tweeted, Adobe “can’t take payment.”

He tweeted: “It was nearly impossible to get out of it as they would charge you to end the term early. I just stopped paying and let them charge me for 4 months!”

Trevor Goodyear, an Atlanta-based lead solutions architect, sought assistance from the State Consumer Protection Offices from what he called as a “very clearly anti-consumer behavior.”

Goodyear said that he got “a refund and no cost contract cancellation.” So, he’s recommending that victims contact the said government office.

He added: “It was not quick but it was effective.”

In February 2021, at the subreddit “r/Adobe,” user “the_random_korean” aired a sentiment in a post titled, “Beware Adobe Creative Cloud Scam.”

The said user wrote: “Please be aware that Adobe auto-renews your account and jacks the price from your original contract without your knowledge.”

This Redditor echoed what DarkPatterns.org also observed: important details being in small fonts, specifically the term “‘auto renew’ in size 6 or 7 font.”

Another “shady” thing the Redditor complained about is this: “Adobe intentionally banks on the fact that [a] subscriber will miss 1 email after 11 months of use.” Adobe emailed this Redditor about an increase in the Adobe Creative Cloud subscription “330 days” after the “initial signup” took place.

Similar complaints were posted at the Adobe Support Community, calling the subscription “a scam.”

We end this topic on Adobe Creative Cloud with some pieces of advice.

“To turn off auto renewal, you will need to cancel your membership,” tweeted Spanish software developer Alfonso Fernandez.

Adobe has posted on its website on how to do that.

Kyle Andrews, a developer from Michigan, tweeted: “Adobe won't let you cancel without paying the remainder of your subscription fee.”

What to do then?

“Switch to a different plan,” said Andrews. Switching will allow you, he added, “to cancel your ‘new’ plan within 14 days without paying the early termination fee.”

After learning about the complaints coming from different parts of the globe regarding Adobe Creative Cloud, it’s high time for Adobe to review how it sells its products.