What Exactly Is Deferred Revenue, And How Does It Affect A Company's Situation? 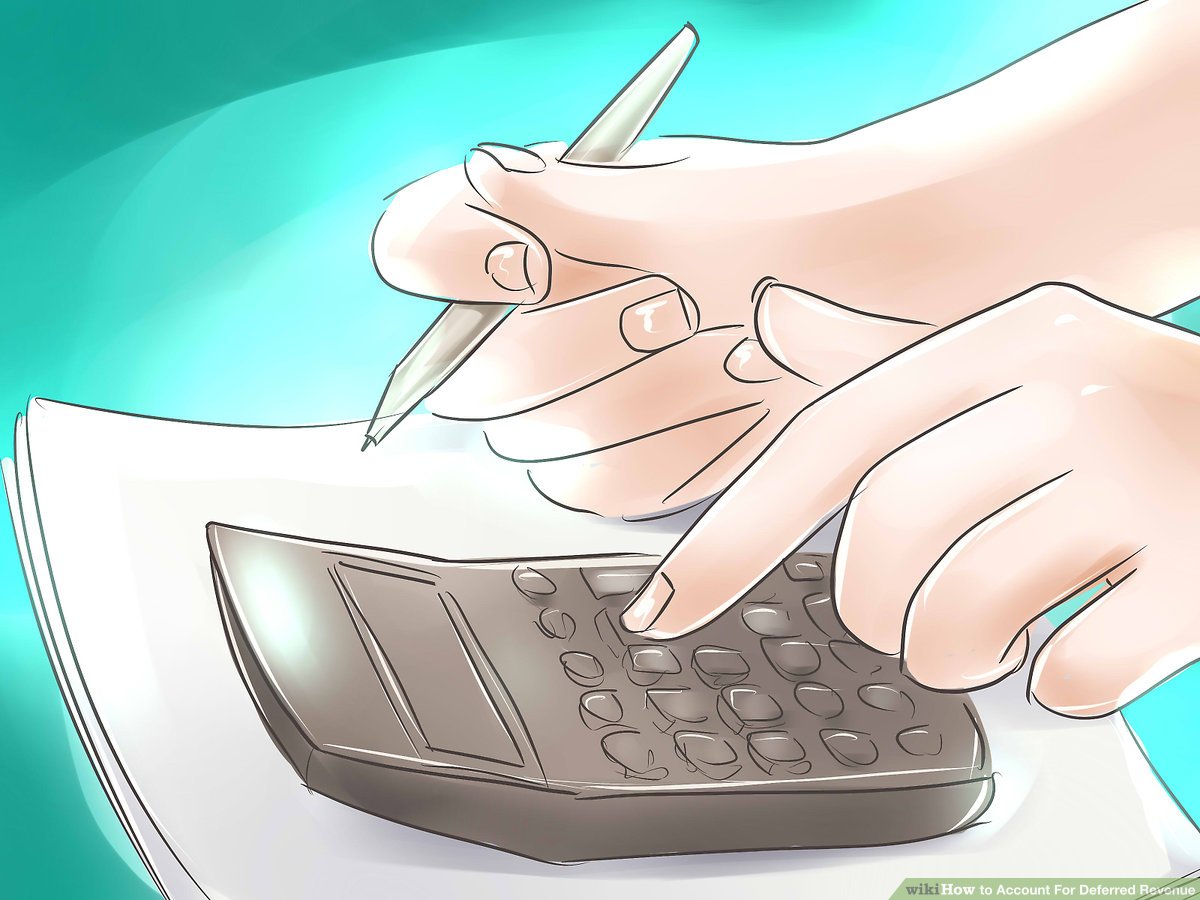 After a good sales period, the feeling of having money in your pocket is both exhilarating and potentially disastrous for your business.

Avoid forgetting the gap between cash in hand and actual profit.Having money does not mean that you have "earned" it yet.

SaaS subscription companies are particularly susceptible to this disparity, as they receive payment from clients before the service is delivered.'Deferred income,' on the other hand, refers to money you get for a product or service that isn't delivered as promised at the time of purchase.

Understanding deferred revenue, on the other hand, will pay benefits for your business in the future.

What Is Deferred Revenue?

If a corporation receives an advance payment for goods or services that will be delivered or performed in the future, it is said to have received "deferred revenue," which is also known as "unearned revenue".

Deferred revenue, a liability, is recorded on the balance sheet of the entity that receives the prepayment.

Due to the fact that it shows money that has yet to be realized, deferred revenue is considered a liability.Accordingly, revenue is recorded on the income statement proportionally when the product or service is provided over time.

A corporation that gets an advance payment accounts for deferred revenue as a liability.This is because it owes the customer items or services.The payment is considered a liability to the company because the buyer may cancel the order or the product may not be delivered.Unless otherwise agreed upon in writing, the corporation must reimburse the customer.

Contracts can specify that no revenue be recorded until all services or products are delivered.In other words, the client's payments would be delayed revenue until the customer got the full amount due under the contract.

GAAP requires specific accounting practices and norms that favor accounting conservatism.Profit reporting is conservative accounting at its best.A corporation reporting revenue conservatively will only record earned income after it has fully claimed the funds and when payment is likely.

Consider an example of a company's accounting entries when deferred revenue is made, reversed, or earned.

A new client paid $1,200 for a one-year contract on August 1.Because the services are spread across a year, the corporation must take $100 monthly payments.

On August 31, the corporation would earn $100.A $100 reduction in the deferred revenue liability would be recorded on the balance sheet. 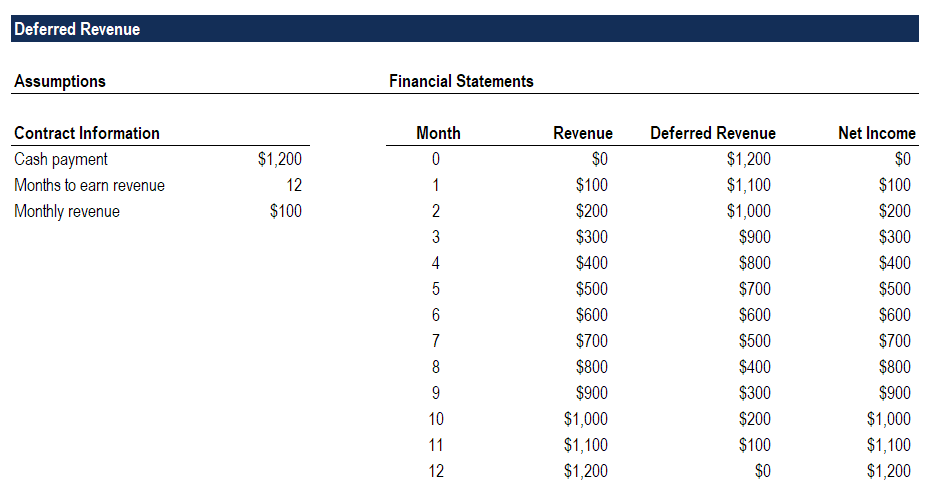 Why Is Deferred Revenue Important?

A liability on the balance sheet is represented by the account for deferred revenues.

Deferred revenue is the difference between the amount of bills that have been paid and the amount of revenue that has been recognized as of the date the invoices were paid.If the revenue is a balance sheet item, then it must be estimated at some future date.

Note that if a contract calculation results in a negative figure, the value is reflected in the balance sheet current asset, Unbilled AR.

How Do You Calculate Deferred Revenue?

As an example to demonstrate the impact of invoicing discrepancies on deferred revenue for a subscription, consider the following two scenarios.

As a reminder, April 2013's period revenue is nearly half of the previous months because it began on April 15.

It's a rolling total of all revenue that has been recorded up to the end of that month.

The final column reads "Deferred Revenue Balance as of the End of the Period."

This shows the value as of the month's last day.The Deferred Revenue Balance, the first row in the revenue schedule table below, would be 12,000 on April 15 and would decrease by the same amount until April 30, when it would be 11,473.97.

The only difference is that the billing will be done on a quarterly basis instead of monthly in this case.The subscription's price and expiration date are the same.On April 1, 2013, an order for a 12-month membership to 12,000 was placed; on April 15, 2013, the subscription began, and on April 14, 2014, the subscription ended.

Columns 1, 2, and 3 of the Revenue Schedule table are identical to those in Example 1 above.Deferred Balance as of the End Period" is distinct from the other columns.Deferred income is clearly affected by invoicing.End-of-period values are erratic; they rise and fall depending on when an invoice is issued. 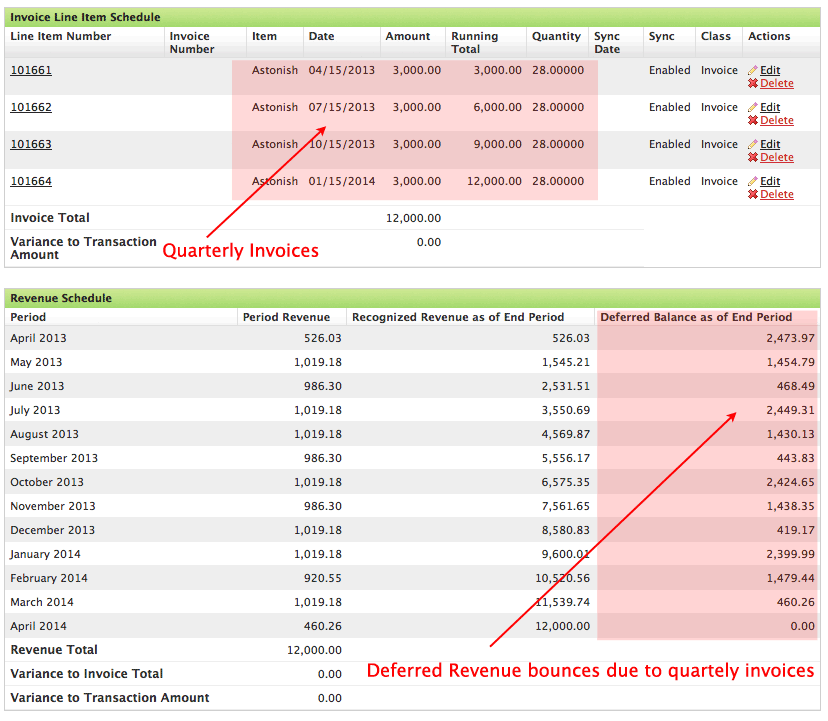 It is only when the customer has paid and the goods or services have been delivered to them that accrual accounting recognizes the revenue as earned.Customers who have paid for goods or services in advance but have not yet received them are said to have incurred delayed revenue.

An proper accounting of deferred revenue on a company's balance sheet is critical to the concept of matching assets and liabilities.As a result, brands aren't able to inflate their earnings.

A company's balance sheet and income statement should be adjusted until the customer's subscription ends, i.e., until the company's responsibility to the client is eliminated, to account for any deferred revenue.