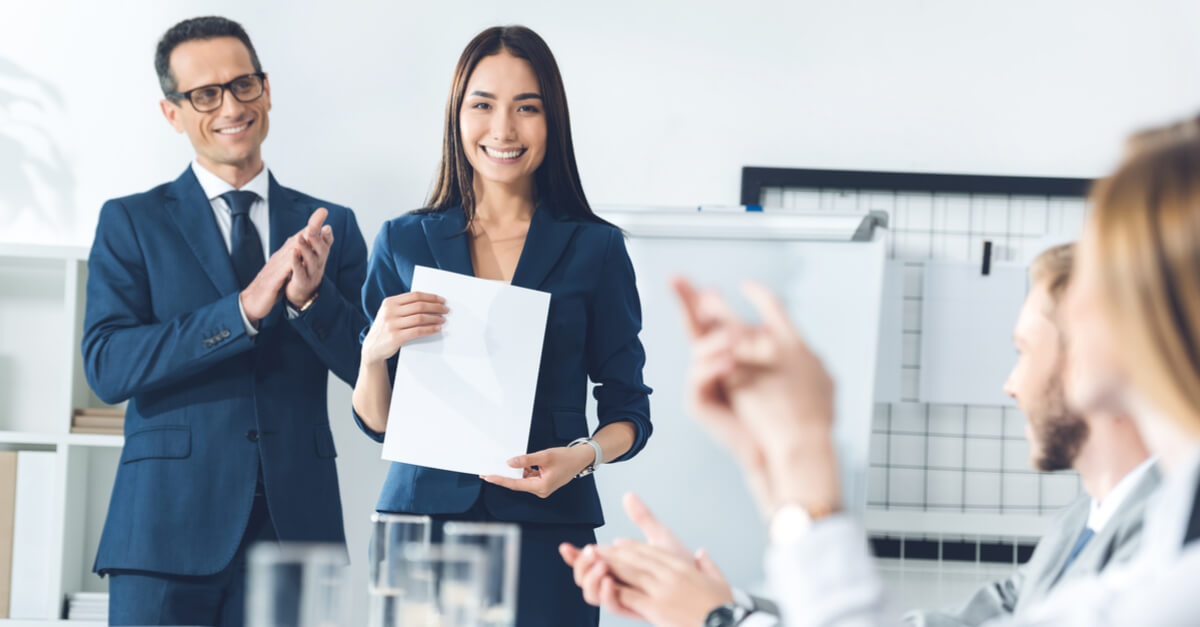 Employee and manager performance has a significant impact on the overall performance of the organization, so managing them is an important part of performance management.

This article examines how a reward system can be used to influence employee behavior.

Although the terms reward and recognition are frequently used interchangeably, they should be considered separately.

Employee reward systems are company-created programs that reward and motivate employees on an individual and/or group level.

They are usually considered separate from salary, but they may be monetary or have another cost to the company.

While previously thought to be the domain of large corporations, small businesses have begun to use them to attract top talent in a competitive job market and to improve employee performance.

Although employee recognition programs are frequently combined with reward programs, they serve a distinct purpose.

They're meant to provide a psychological as well as a financial benefit.

Despite the fact that many aspects of design and maintaining reward and recognition systems are the same, it is useful to keep this difference in mind, especially for small business owners interested in motivating staffs while keeping costs low.

Differentiating Rewards From Merit Pay And The Performance Appraisal

A small business owner must separate the salary or merit pay system from the reward system when designing a reward program.

Financial incentives, particularly those given on a regular basis such as bonuses, profit sharing, and so on, should be linked to an employee's or a group's achievements and considered "pay at risk" to separate them from salary.

A manager can avoid the employee feeling entitled and ensure that the reward emphasizes excellence or achievement rather than basic competency by doing so.

Employee reward systems do not include merit pay increases.

They are usually an inflationary increase with additional percentages separating employees by competency.

They aren't particularly motivating because the distinction between a good and an average employee is usually quite small.

Furthermore, they raise a company's fixed costs, as opposed to variable pay increases like bonuses, which must be "earned" each year.

Finally, in many small businesses, successful employees must work well with others.

Merit raises typically evaluate an individual's job performance without taking into account the performance of the group or business as a whole.

A highly motivated workforce can help an organization achieve its goals.

When employees are motivated to work at higher levels of productivity, the company as a whole runs more smoothly and effectively toward its objectives.

In contrast, an unmotivated workforce can disrupt an organization and divert employees' attention away from their work.

As a result, managers must understand the importance of reward systems and how they are used to influence employee behavior.

Positive outcomes earned as a result of an employee's performance are referred to as rewards.

These incentives are in line with the company's objectives.

When an employee assists an organization in achieving one of its objectives, they are frequently rewarded.

There are two distinct types of rewards that motivate people: intrinsic and extrinsic.

Intrinsic motivation is driven by personal interest or enjoyment in the work itself and is something that you have to offer yourself.

Because intrinsic motivation comes from within, achieving it does not require the help of others.

Some people believe that the most powerful rewards originate from within.

Consider how you feel when you've overcome a significant challenge or completed an assignment or work project that required a significant amount of effort.

Intrinsic motivation gives a person a personal pat on the back or a natural high that reflects their ability, competency, growth, knowledge, and self-control in their endeavors.

Employees who are intrinsically motivated work more efficiently and strive to develop professionally. Intrinsic rewards include things such as: personal achievement, professional growth, sense of pleasure and accomplishment.

Extrinsic motivation is when you do something because you want to earn external rewards or avoid punishment.

You are extrinsically motivated if you are reading this article because you need the information to study for an exam or write a paper.

Intrinsic And Extrinsic Motivation Can Coexist

People can engage in the same behavior for various reasons, resulting in different motivations.

However, even though they are diametrically opposed, intrinsic and extrinsic motivation can coexist at times.

For example, you may be studying psychology because you are interested in the subject but also want to get good grades.

As a result, you study very hard for both intrinsic and extrinsic reasons.

So you have intrinsic as well as extrinsic motivation to learn.

Objectives Of A Reward System

Aligning The Goals Of The Organisation And Employees

The incentive program should support the organization's goals.

At the strategic level, the reward scheme must be consistent with the organization's strategy.

If a differentiation strategy is chosen, for example, employees may receive more generous benefits, which may be linked to achieving certain skills or meeting predetermined targets.

A simple reward scheme offering fairly low wages may be appropriate in an organization with a cost leadership strategy because less skilled staff are required, new staff are easy to recruit and require little training, and there is less incentive to offer generous rewards.

Walmart, the largest supermarket chain in the United States, competes on price.

It hires people with low skills and pays them low wages.

It discourages employees from working overtime, as it wishes to avoid paying overtime rates.

To Recruit And Retain Sufficient Employees With The Right Skills

It will be difficult to recruit staff if the rewards offered are not competitive, because potential employees can obtain better rewards from competitors.

Existing employees may also be tempted to leave the organization if they are aware of its uncompetitive reward system.

When existing employees leave, some of the organization's accumulated knowledge may be lost forever.

Human capital may be one of the most valuable assets for many knowledge-based organizations.

High-tech companies, such as Microsoft, rely on knowledge and thus pay competitive salaries to key employees.

Employee motivation is clearly an important factor in an organization's overall performance.

Organizations want their employees to work harder and be more adaptable.

The relationship between reward schemes and motivation is a complex issue that has sparked heated debate in both accounting and human resource literature.

Maslow's hierarchy of needs is a well-known motivation theory.

According to Maslow, people's wants and needs are organized in a hierarchy.

The lower levels of the hierarchy are physiological, relating to the need to survive (e.g., food and shelter); once these are met, humans desire safety, which is followed esteem, and finally at the top of the hierarchy, self actualisation, or self fulfilment.

The Role Of Appraisal In Reward Systems

Many performance-based incentive schemes are based on employee performance.

As a result, the performance of the employees must be evaluated.

This is usually done during the appraisal process.

Staff will be evaluated on a regular basis, such as twice a year.

During the appraisal, targets for the next period will be set, and rewards will be agreed upon if the targets are met.

What Is The Importance Of The Reward System In An Organization?

How Do Reward Systems Motivate Employees?

Employees are more likely to view the process as fair when rewards are distributed based on objective data, and they are also more likely to have a concrete understanding of what is expected of them.

This will motivate them to achieve the desired performance results.

Giving a reward first and then expecting good behavior is bribery, not reward, and is unlikely to work.

Promiseing a large reward for perfect behavior in the future is a recipe for failure.

A good reward system encourages employees to work harder and aligns their goals with those of the organization for which they work.

The current trend toward performance-based reward systems is intended to reward and motivate those who contribute the most.

However, designing such reward systems is difficult because they are intended to influence human behavior.

'There is no such thing as a good pay system; there is only a series of bad ones,' said Flowpack Engineering's human resources director (quoted in Bratton). The trick is to select the least bad option.'