An Overview To Predatory Pricing 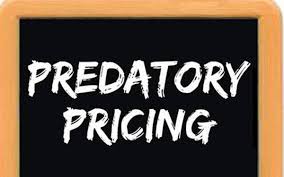 One of the best techniques to increase sales for your organization is to use price strategy. Market penetration and competition can be improved by the correct amount of price reduction. This is especially true when the market is highly competitive.

Predatory pricing becomes problematic when it exceeds the bounds of fair competition.

Fair, competitive pricing can be difficult to discern from illegal, predatory pricing. Find out where the limits are and how to keep your price competitive without breaking the law by reading on.

What is Predatory Pricing?

What Is Predatory Pricing?

In order to eliminate competitors from the market, predatory pricing involves intentionally lowering prices so low that they can no longer compete.As a result, any company that sends out a strong signal of competition is likely to be shunned by potential rivals.Prices below the incremental marginal cost of production are referred to as predatory.

It is expected that predatory pricing will lead to higher prices and exceptional profits for the company, but if higher prices remove the primary barrier to entry, then an excessive price increase may soon lead to the entry of new competitors, who must then be warded off with yet another round of predatory prices.When corporations engage in predatory pricing, they do so in order to increase production quantities, which lowers costs and allows them to profit at the "predatory" price point. In fact

In order to avoid incurring a loss on every unit sold until competitors quit the market, predatory pricing is only a possibility for large companies with sufficient financial resources.

Predatory pricing gives a long-term unfair advantage to a business that can afford the initial losses.As a result, investors perceive these low costs as a way to gain market share, then raise prices and generate even more dramatic profits in the future.Investors may be ready to accept this short-term strain if the company's future expected cash flows are solid.

Predatory pricing drives away new competitors and increases the difficulty of starting a new business.Consumers and retailers can no longer expect a competitive market to set prices that are affordable.

If you look at predatory pricing from this perspective, it's more like a short-term anti-competitive pricing strategy.Businesses that use predatory pricing will eventually have to raise their rates in order to maintain their position as a price leader, putting their dominance at risk.

Effects Of Predatory Pricing On An Industry

Because of price wars, businesses are losing money because customers are being diverted to their own businesses.

Long-term gains in market share are possible for the company that withstands the pricing war, but it is unlikely to establish a monopoly in the industry.

A company can raise prices and recoup lost earnings after competitors are eliminated.

Price appreciation works best on inelastic items when a customer's willingness to pay decreases as prices rise.Customers pay the price in the long run, while the now-near-monopolistic corporation stands to gain financially from price increases.

As far back as Aristotle's day, firms have been using predatory pricing tactics all across the world.We looked at a few cases to see how the initial advantages of predatory pricing gradually develop into downsides.

The price war between Walmart and Target in Minnesota is an excellent illustration of price gouging by huge franchisees.

As a price-cutting strategy, Walmart began selling some prescription medications at a discount substantially below the company's price ceiling.A price floor is the lowest price at which a product can be sold legally while still making a profit, as determined by the government.

In order to avoid being outdone, Target matched these price reductions for prescription drugs.The pricing war was put to rest, however, by Minnesota state law, which prohibits the sale of pharmaceuticals for less than their advertised cost and limits the discount.

This was seen in the Darlington Bus War, where some businesses were ready to price so low that they were willing to give away their product or service for free.Several private companies began competing for public transportation customers with the deregulation of buses in the United Kingdom in 1986.

For the purpose of creating a monopoly, Busways began offering free trips to its rival DTC, a company that was already operating in the market.They were labeled as "predatory, reprehensible, and against the public interest" by a commission set up to look into their operations.

In fact, DTC was shut down and Busways was purchased by Stagecoach, a much larger corporation.It was later revealed that monopolizing the Darlington area had actually had a detrimental impact on the company's bottom line, as Brian Souter, the chairman of Stagecoach, confessed.

To deny that e-commerce enterprises are engaging in predatory pricing practices is foolish, and it is prohibited.Established and new firms alike require the know-how and resources to compete with Amazon, Target, and Walmart as well as local suppliers in the age of ecommerce, which has seen a meteoric rise in popularity in the previous decade.

Amazon and other large competitors like them aren't going anywhere any time soon in terms of aggressive practices.It's imperative that if you can't beat them, you at least join in and "equal" the competition.Even in a market with large competitors and well-coordinated price tactics, solutions like dynamic pricing software help tiny ecommerce firms prosper.